Some Online Poems and Interviews, See Links below: 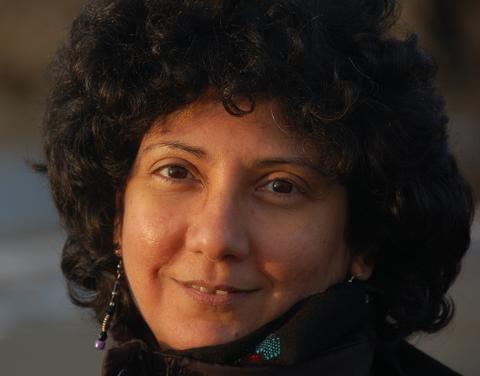 Zilka Joseph's work is influenced by Indian and Western cultures and by her Bene Israel roots. She was awarded a Zell Fellowship (MFA program) and the Elsie Choy Lee Scholarship (Centre for the Education of Women) from the University of Michigan. She has received many award nominations, honors, participated in literary festivals and readings, and has been featured on several radio programs and online interviews. Her work has appeared in POETRY, Poetry Daily, The Writers’ Chronicle, Frontier Poetry, Kenyon Review Online, Michigan Quarterly Review, Asia Literary Review, Cha, Poetry at Sangam, Pratik, The Beltway Poetry Quarterly, Review Americana, Gastronomica, and in anthologies such as Cheers To Muses: Contemporary Works by Asian American Women, Uncommon Core, RESPECT: The Poetry of Detroit Music, Matwaala Anthology of Poets from South Asia (which she co-edited), 101 Jewish Poems for the Third Millennium and The Kali Project. Her chapbooks, Lands I Live In and What Dread, were nominated for a PEN America Beyond Borders and a Pushcart award respectively. Sharp Blue Search of Flame, her book of poems published by Wayne State University Press was a finalist for the Foreword INDIES Book Award. Her third chapbook Sparrows and Dust won a Best Indie Book Award and has been nominated for a Pushcart. In Our Beautiful Bones, her most recent book, is a Foreword INDIES Book Award finalist, and has had been nominated for a Pushcart, A PEN, Griffin, and the National Book Award. She was born in Mumbai, lived in Kolkata, and now lives in Ann Arbor, USA.  She teaches creative writing workshops, and is a freelance editor and manuscript advisor. She is dedicated to coaching, lifting up  every writer she works with, and creating a unique community of writers/students wherever she lives and teaches.

Zilka Joseph has been nominated several times for a Pushcart prize, PEN, and for a Best of the Net award. Her work has appeared (or is forthcoming) in POETRY, Poetry Daily, Mantis, Kenyon Review Online, Michigan Quarterly Review, Asia Literary Review, Frontier Poetry, CHA, Solstice, COG Literary Journal, Quiddity, Poetry at Sangam, Pratik, The Beltway Poetry Quarterly, Review Americana, Gastronomica, Cutthroat, Rattle, The MacGuffin, The Paterson Literary Review, pacificREVIEW, Third Wednesday, Cheers To Muses: An Anthology of Contemporary Works by Asian American Women, and in anthologies such as RESPECT: An Anthology of Detroit Music Poetry, 101 Jewish Poems for the Third Millennium, The Kali Project, and Uncommon Core: Poems for Living and Learning, a Neutral Zone Anthology. She has won several honors including the Elsie Choy Lee Scholarship from the Center for Education of Women, a Zell Fellowship, and the Michael S. Gutterman prize in poetry from the University of Michigan.

Her first chapbook Lands I Live In (Mayapple Press, 2007) was nominated for a PEN America Beyond Margins award, and her second chapbook What Dread (2011) which was a semi finalist in Finishing Line Press’ New Women’s Voices contest, was nominated for a Pushcart. Her first full-length collection of poems Sharp Blue Search of Flame was published by Wayne State University Press (2016) and was a finalist for the Foreword INDIES Book Awards. Her most recent chapbook Sparrows and Dust was published by Ridgeway Press in March 2021, and has won a Best Indie Books Award. In Our Beautiful Bones, her most recent book was a finalist for the Wheelbarrow Award from Michigan State University and from Galileo Press. It was published in August by Mayapple Press, and has been nominated for several awards.

She has collaborated with artists on interdisciplinary projects which have culminated in exhibitions, performances, readings at the University of Michigan and in art galleries and cultural centers in several cities in the US, and her work was published along with her collaborators' work in two books-- India: A Light Within and Wisdom of the Lotus. In addition, her work had been selected several times by the jurors of Asian American Woman Writers Artists Association (San Francisco, CA) for curated art and culture exhibitions and for their anthology. She and pianist Veena Kulkarni-Rankin have collaborated on a performance of her poem "City of Hibiscus Eyes" as part of the Rasa Festival of the Arts.

The University of Michigan WCBN Radio’s Living Writers Series recorded two interviews with her, and her work has appeared in The Living Room, Michigan Radio/NPR, an episode about diaspora, and Art in the Air. She read at the Author's Forum event at the University of Michigan (a video recording of the event is available). A stunning review of her new book was aired on Michigan Public Radio's Stateside ​in August 2017. Her book was also received critical attention in Wasafiri and World Literature Today. She was featured in the Ann Arbor Observer for her achievements, her dedication to poetry, and her work in the community. She reads in Ann Arbor and in other cities in the US, and in Kolkata. She participates in the Matwaala South Asian Diaspora Poetry Festival in NYC, and in the Rasa Festival in Ann Arbor that showcases South Asian (Ann Arbor/US/India) artists and performers, every year. In January 2019, she was invited to read at the International Neighbors Gala in Ann Arbor, and in April 2020 at Stony Brook University, NY, as part of the Matwaala Festival. (A recording has been posted as the event was cancelled due to Covid).

She was born in Mumbai, and is from the Bene Israel community. She lived and was educated in Kolkata, India. Her teaching experience covers higher education to elementary levels, as well as experience in teaching  a wide range of populations--undergraduate, senior citizens, immigrant, international and diverse groups. She has taught and/or worked at the University of Michigan, Washtenaw Community College and Oakland Community College, been a Writer-in-residence at InsideOut Detroit. She has also taught at the Roeper School, been an ESL instructor at the Utica Adult Education Center in Michigan, a volunteer instructor at the Indo American Center (where she received an award for her contribution two years in a row) and Nettelhorst School in Chicago. She was a high school English teacher at St. James' School for Boys, Kolkata. She has a BA in English and a BEd (a post-graduate teaching degree), from the University of Calcutta, India, an MA in Comparative Literature from Jadavpur University, Calcutta, India, and an MFA in poetry from the University of Michigan, Ann Arbor, Michigan, USA.

Recently her new book manuscript was among five finalists for the Wheelbarrow Poetry Prize from Michigan State University. The judge was Mark Doty. It was also a finalist in the Galileo Press prize. Her new chapbook (her third) was published in April, 2021.

Currently, she teaches creative writing workshops in Ann Arbor and Metro-Detroit. She offers a workshop annually for the Psychology department and the Barger Leadership Institute at the University of Michigan. She is also a manuscript coach, freelance editor, and a mentor to writers in the Ann Arbor community.​